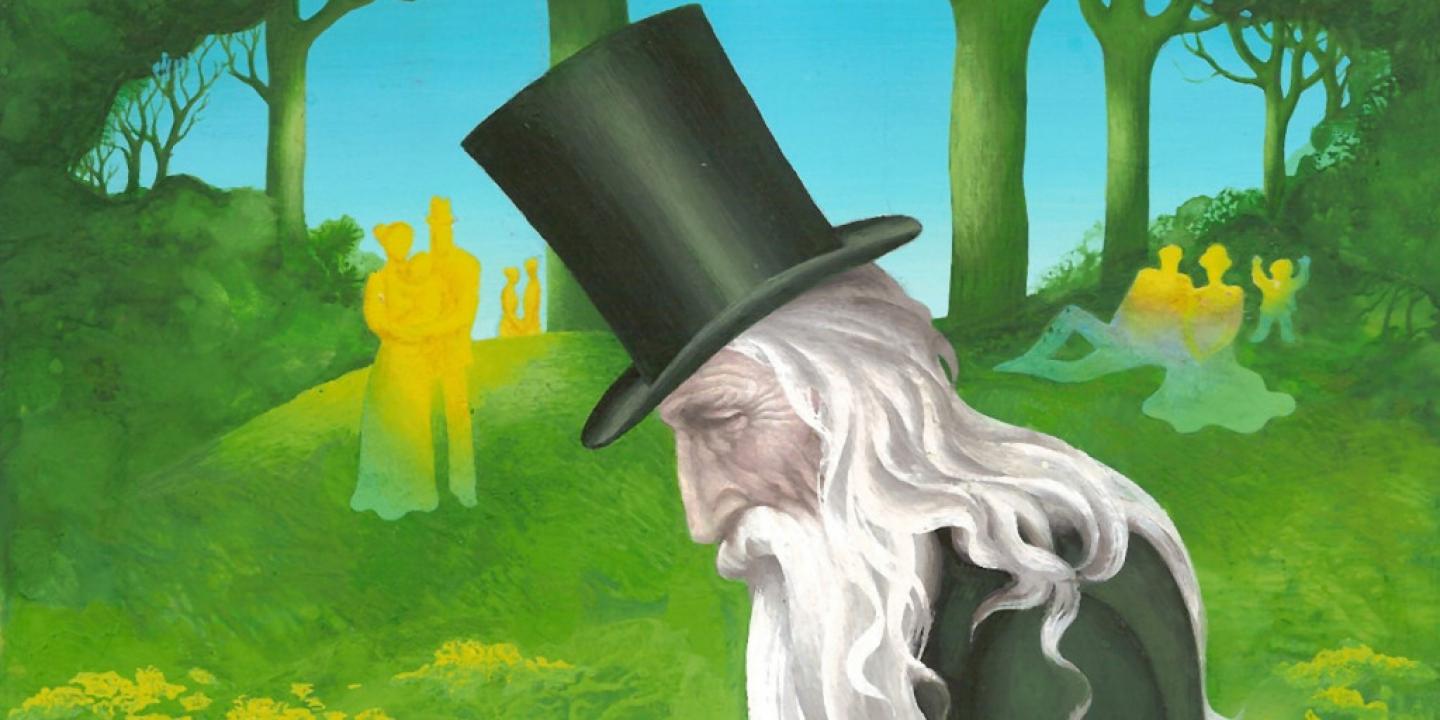 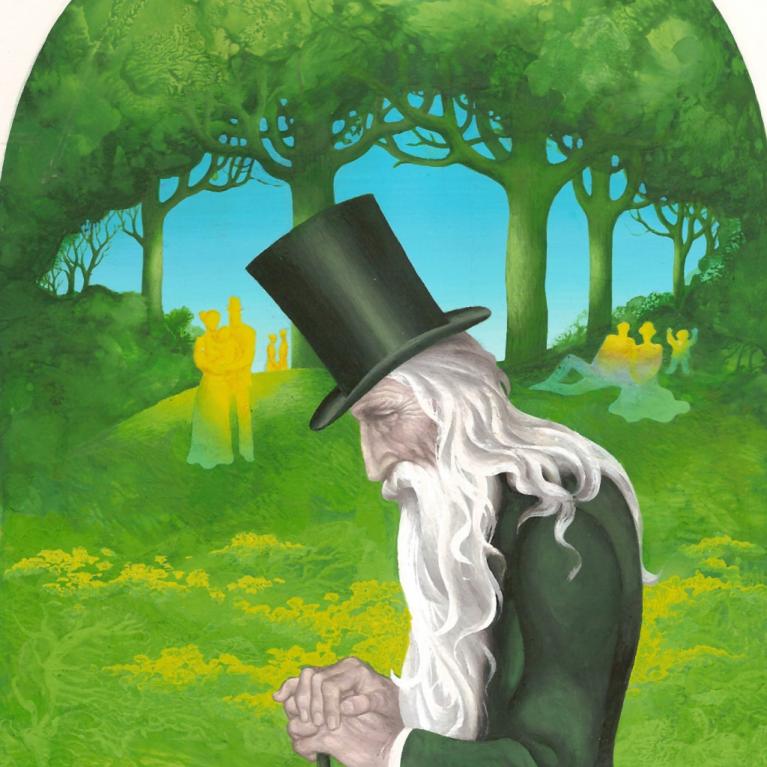 Exhibition from the cycle The Generation

With a Farthing in Pocket, an exhibition of Gunārs Cīlītis works, is presented in the LNMA’s cycle The Generation in the 4th Floor Exhibition Halls of the main building of the Latvian National Museum of Art in Riga (Jaņa Rozentāla laukums 1) from 18 June to 4 September 2022.

Gunārs Cīlītis (1927–2007) – a painter or a graphic artist? Cīlītis thought and felt himself as a painter, it was more important than anything else, but there was always something that led him astray. Yet, irrespective of whether it was – a drawing, a character for a puppet film, a small cartoon, an illustration for a book or a magazine – attention was devoted to each artwork as the most essential at that moment.

Starting already from 1957, Gunārs Cīlītis’ name frequently appeared under illustrations in magazines Zvaigzne and Dadzis, although there was still not enough time for painting. In his pocket, Cīlītis always had variants of ideas on larger on smaller pieces of paper, matchboxes and serviettes, as well as hopelessly missed submission deadlines, nevertheless, the folder of drawings placed on the editor’s desk instantly changed the heated situation. Only Soviet typography, when seeing the fineness of the blurred and lost lines and the bright colours that were soaked into paper, could not satisfy any professional.

Gunārs Cīlītis’ Self-portrait on the Bridge (1957), which was shown in the 2nd LSSR Exhibition of Young Artists’ Works, caused unimaginably big discussion and left a powerful mark on his subsequent path in art. The unexpectedly sharp and withering reaction from the leading art critics prevented Cīlītis from hearing the support which also was voiced in the discussions. Cīlītis – as painter – retreated to the seclusion of his studio. On that occasion, almost each of the young artists – Biruta Baumane, Boriss Bērziņš, Uldis Zemzaris, Rita Valnere, Henrijs Klēbahs – received a didactic or sarcastic remark, which, it must be added, did not dissuade them from painting. It is possible that Cīlītis’ own doubt, his slow method of painting and ceaseless search for a better solution did not contribute to his belief in own ability. 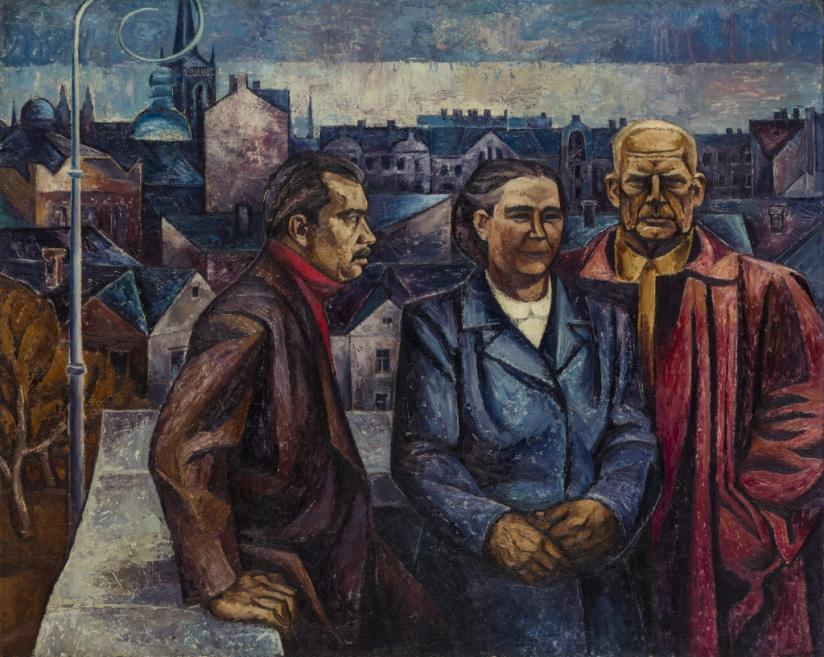 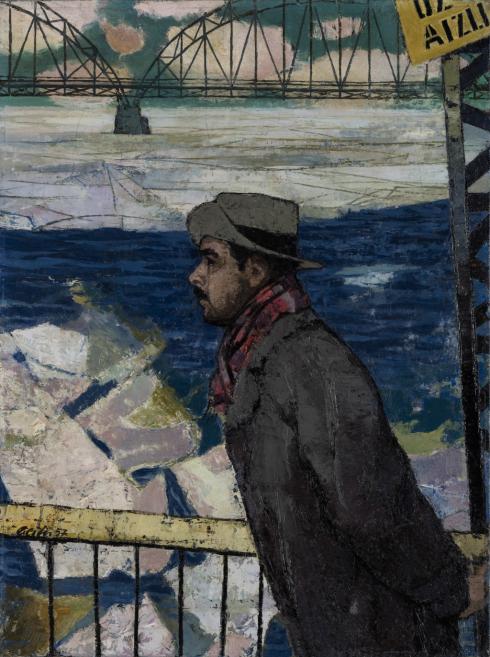 Gunārs Cīlītis. Self-portrait on the Bridge. 1957.
Oil on canvas. Collection of the Latvian National Museum of Art, Riga. Publicity photo 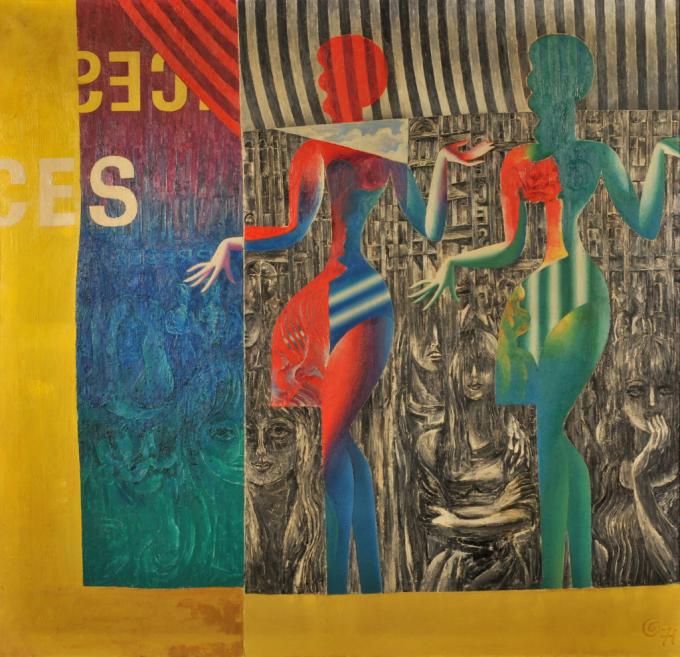 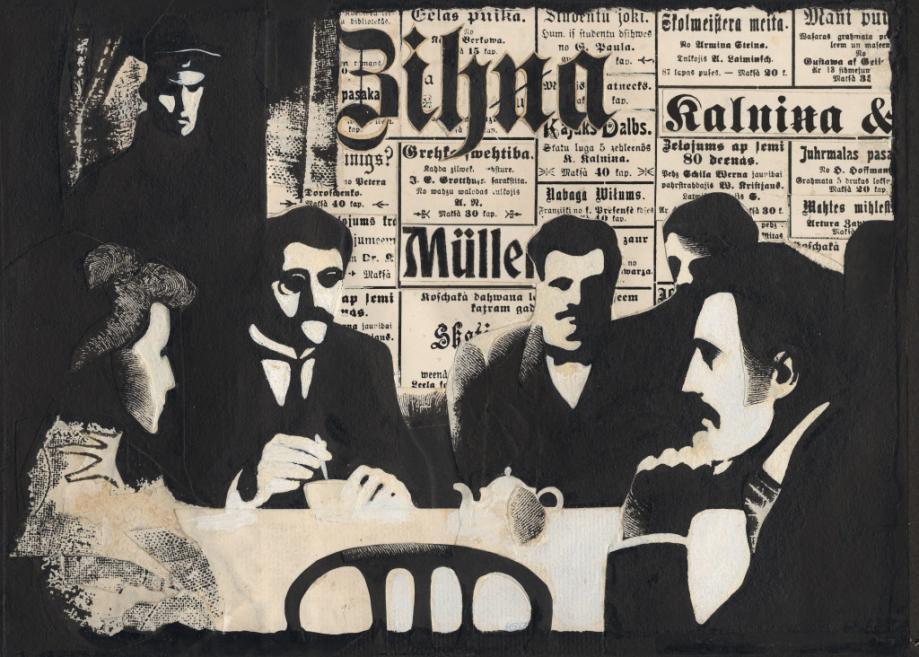 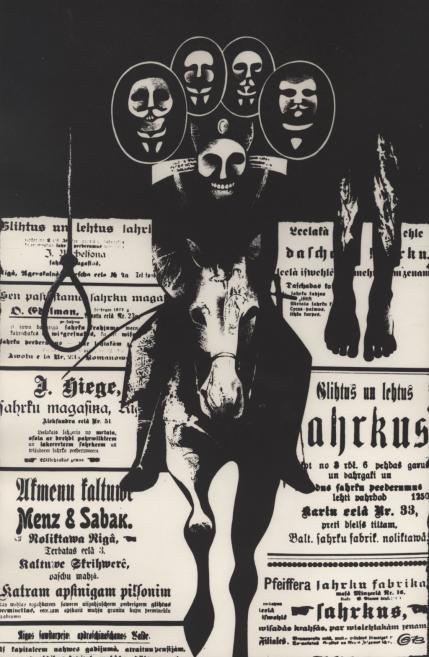 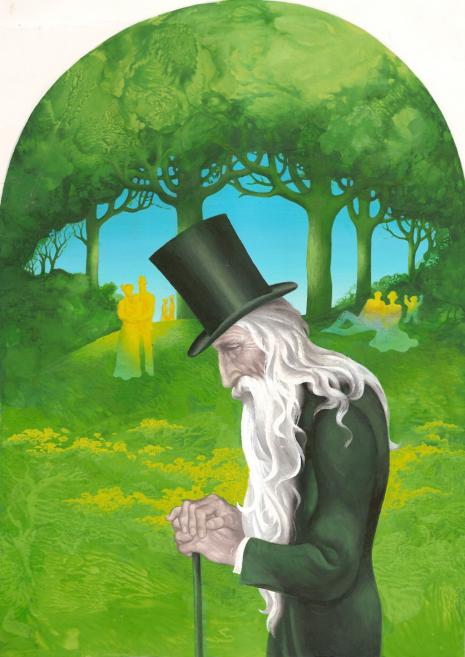 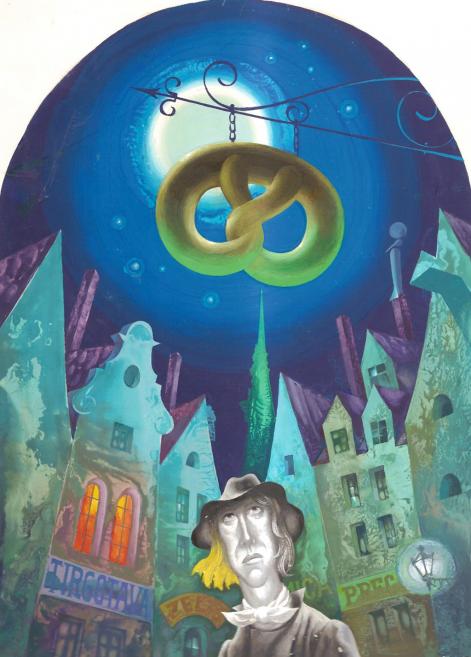 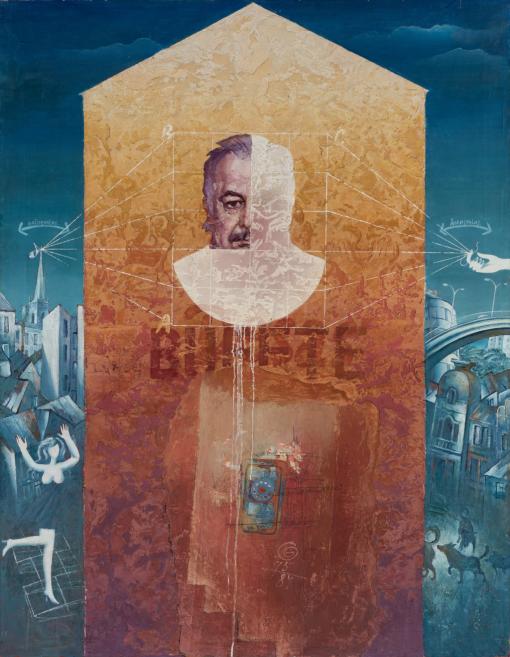 In 1966, Gunārs Cīlītis submitted the documents he had already prepared in 1961 for the Section of Painting of the Artists’ Union of the LSSR to the Section of Graphic Art and was emphatically admitted, although it did not really bring him satisfaction as it represented a rejection of himself as a painter. His subsequent exhibition activity was more related to graphic art and cartoons, which, for Cīlītis, was merely work for money. Already at the time the artist was and still remains recognised as an outstanding professional of book art – Alberts Bels’ Caller’s Voice, Zigmunds Skujiņš’ Conversations with Fireflies, Regīna Ezera’s With My Own Wind, Violence as well as the Latvian translations of Ernest Hemingway’s For Whom the Bell Tolls and D. H. Lawrence’s Lady Chatterley’s Lover.

Want to become rich – go to the Daile Theatre! In 1966, an attractive offer in a new field received – to make stage design at the Daile Theatre for Arkady Arkanov’s and Grigory Gorin’s comedy Wedding for the Whole Europe. It was Pauls Putniņš’ debut as director. Cīlītis dedicated the costume sketches to each specific actor, which turned out well, even comical, the actors were captivated. The sketches for the stage design likewise appeared interesting at first, yet the rather unsuccessfully developed communication with the stage engineer led to a mistake that could not be corrected before the performance – the decorations were too tiny. It must be added, that for Pauls Putniņš this, too, was the first and the last work in theatre direction, later he practiced only playwriting and literature.

Then came the time in cinema together with director Arnolds Burovs and approximately ten fanatic puppeteers. His worker’s ID alongside Gunārs Cīlītis’ name bears the inscription ‘production designer’, and that meant he could not escape becoming famous! A joke, but that is what happened. The puppet films produced in the studio became lullabies to an entire generation –Pygmalion (1967), Crazy Dauka (1968), The Fairy Tale of the Farthing (1969), Little Hawk (1978). The most significant turned out to be Kārlis Skalbe’s The Fairy Tale of the Farthing, which ensured that the unspendable magic coin rolled into Cīlītis’ pocket without him even noticing.

In 1970, a book was made with the characters from the film, whose typographic quality again disappointed the artist. The farthing reminded of itself once more in 1978, when Gunārs Cīlītis received an offer from publishing house Liesma to make new illustrations, with which he was almost satisfied. “Money matters” for the artist did not end with this book which underwent repeated print runs. From 1997 to 2001, the farthing was joined by the coins he designed for the competitions of Latvijas Banka. One of the more complex was the coin in the shape of a garment button, which in 2001 earned international recognition for most innovative coinage concept.

His 1971 exhibition in the exhibition hall of the Artists’ Union of Latvia (AUL), together with his friends Uģis Mežavilks and Aleksandrs Stankēvičs, could be considered another attempt to show, alongside cartoons, illustrations and puppet film designs, his recently completed paintings Shop Window (1971), Self-portrait with Parents (1968) and War (1970), which the Artists’ Union acquired for its collection, but for Cīlītis the exhibition again caused a feeling of disappointment – it seemed like again he was being misunderstood. After a break of 35 years artist received an unexpected invitation to take part in the exhibition Latvian Painting. Late 50s – 70s in St. Peter’s Church, and from this exhibition the Latvian National Museum of Art (LNMA) acquired for its collection the artist’s self-portrait Grīziņkalns – Āgenskalns.

The collection of the National Archives of Latvia holds a box full of Gunārs Cīlītis’ diaries with at times terse and short sentences, at times longer conversations with himself and loneliness which even his closest friends did not suspect. The artist had been writing already since 1945 up until the end of his life, which became the basis of Rūta Muižniece’s monograph Which Way is the Road Even? (2016) and provided invaluable assistance in the preparation of this exhibition.

The LNMA holds 6 paintings by Gunārs Cīlītis, 19 original illustrations and film sketches, which entered the museum’s collection after the artist’s death, while the diaries, cartoons, original illustrations and variant sketches came into the possession of the National Archives of Latvia, with whose kind support part of this material is shown in the exhibition. Very recently the collection of the methodical funds of the Art Academy of Latvia succeeded in reclaiming Cīlītis’ diploma work, which also is included in the exposition. From the collection of the AUL, the exhibition includes the painting War, during the making of which a single word is repeated in the diary – Czechoslovakia and reflections on the 1968 crushing of democratic processes with the brute military force of the USSR armed forces.

Ilze Putniņa, Curator of the Latvian Painting Collection (2nd Half of the 20th – 21st Century) /
Latvian National Museum of Art

Curator of the exhibition cycle The Generation