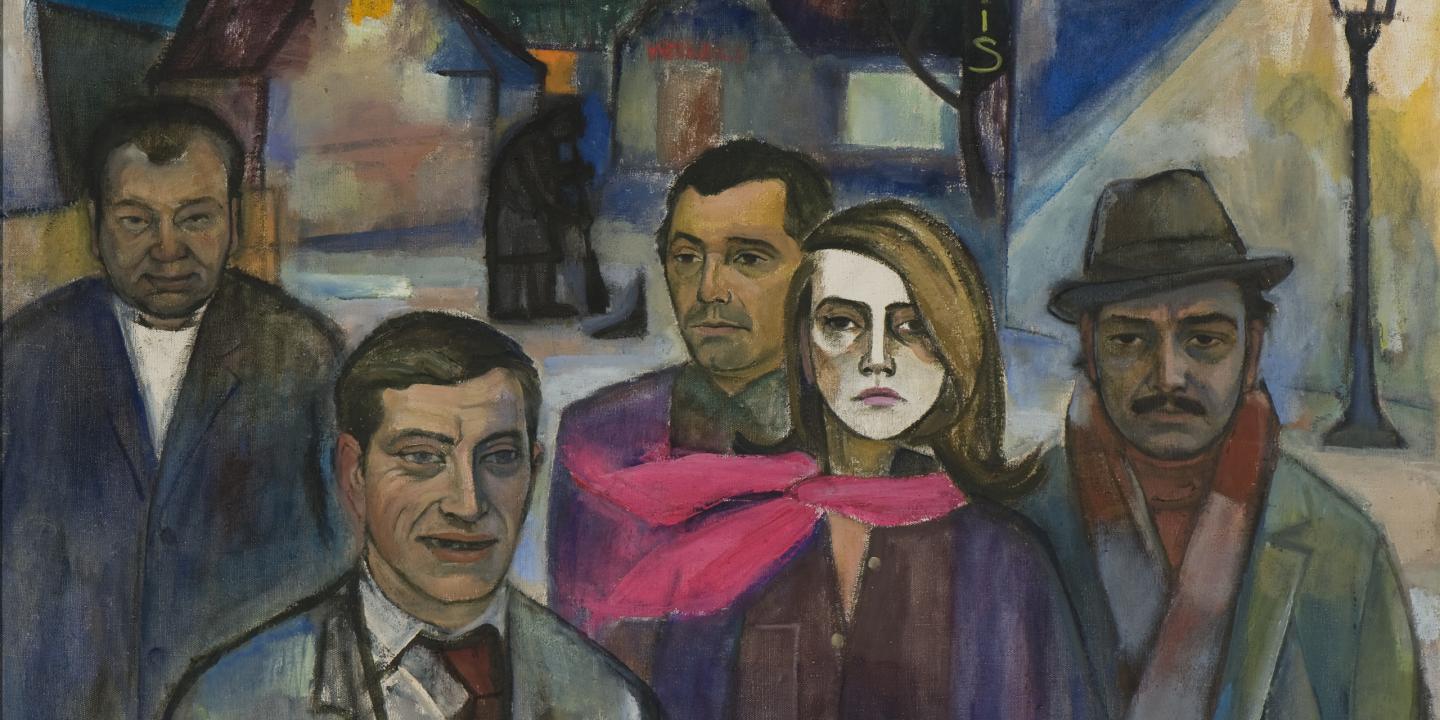 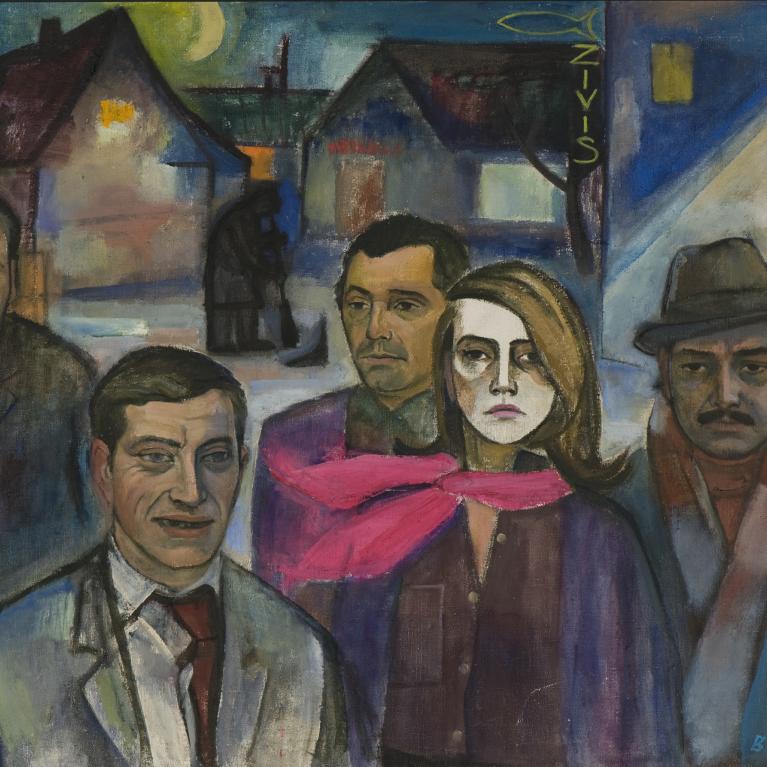 LOVE & LIFE, the exhibition of works by prominent Latvian painter Biruta Baumane, is on view from 16 September 2022 to 8 January 2023 in the White Hall in the left wing of the 2nd floor of the main building of the Latvian National Museum of Art in Riga (Jaņa Rozentāla laukums 1).

Biruta Baumane (1922–2017) was born one hundred years ago and spent seventy of these painting. In Latvian art that represents a dynamic combination of painting and life. Baumane’s art is probably among the most intimate, and she herself is the object of this art. Life is more beautiful than art, but to paint is to live. Biruta Baumane is with those whom she feels, and she paints what echoes in her heart.

A group portrait painted in 1969 – Boriss Bērziņš, Aleksandrs Stankevičs, Vilis Ozols, Gunārs Cīlītis and in the centre – Biruta Baumane. It is a work that had to serve as a substitute for the five purchased by the State Tretyakov Gallery, with the artist’s inability to part from her canvases becoming legendary over the years. A version of this coveted work was painted in the course of a few days, while the original remained in the studio. This work contains all the threads of Baumane’s painting. The pink scarf – the mad, fragrant and fragile tone of the burnet rose, bright, attractive yet fleeting. Biruta’s face is as white as a mask where disappointment and pain have chased vital colour away from her face, with only the contour of the mouth and the reddish tone tracing a smouldering, spiteful vitality. One with four friends, sharing a path in art and in life, and their postures around Biruta suggest protection and friendly warmth. A lantern illuminates this small nightlife scene, frozen in dramatism known only to itself, yet Biruta would break it with a call that life is beautiful, if she could, she would dance it out on tiptoes to everyone she encounters, the Earth would not hold her back, it would be bliss to flow in the bright lights of the stage! The dramatism in the air is merely heartache which blossoms and under the cover of the night ignites a wild lust for life.

The best thing in life is dance! Being in the stage lights is happiness, that is where Biruta has to be! The time at the Tērvete school where the artist’s parents spent half a century working as teachers was beautiful and harmonious. The extensive library, visits from outstanding writers and artists to Tērvete Sanatorium and most importantly – the magical Christmases with staged plays and dancing. While studying at the Jelgava Gymnasium, in the evenings, under the cover of painting lessons, there are the commutes to the Ballet School at the Opera, since her parents considered the life of an artist less risky, yet Biruta determinedly pursues only one goal – to dance! Yet her drawing and painting skills proved to be insufficient to begin studies at the Art Academy. Biruta remains in Riga, while her recent friendship with Tatjana Suta brings her into the studio of artist Romans Suta. It is her first serious encounter with art, painting increasingly captivates her. Her results in the exams in the following year are outstanding, Biruta is admitted to the second year. After painting classes at the academy, Biruta attends Helēna Tangijeva-Birzniece’s ballet studio. 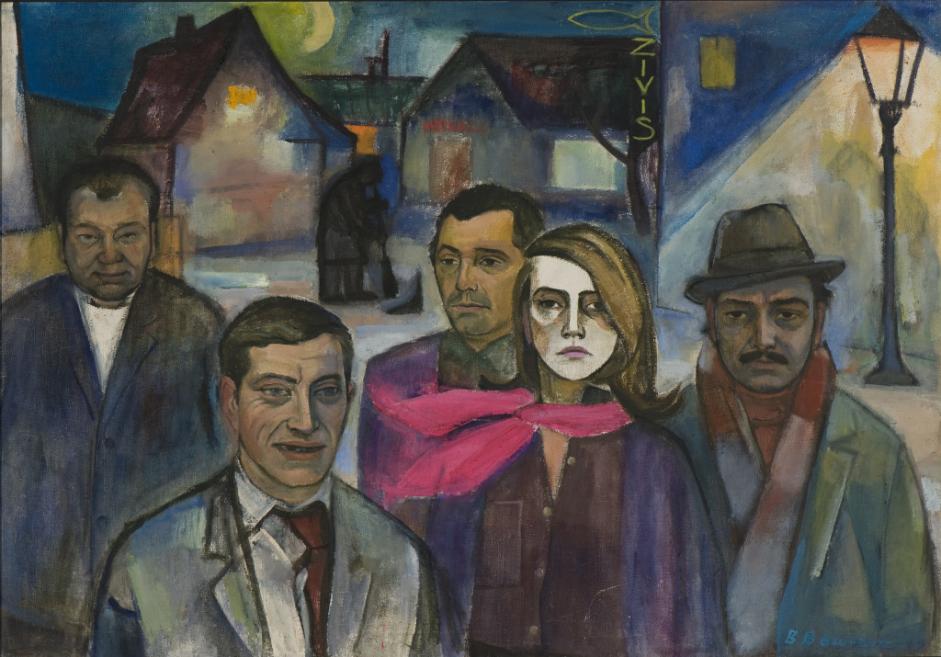 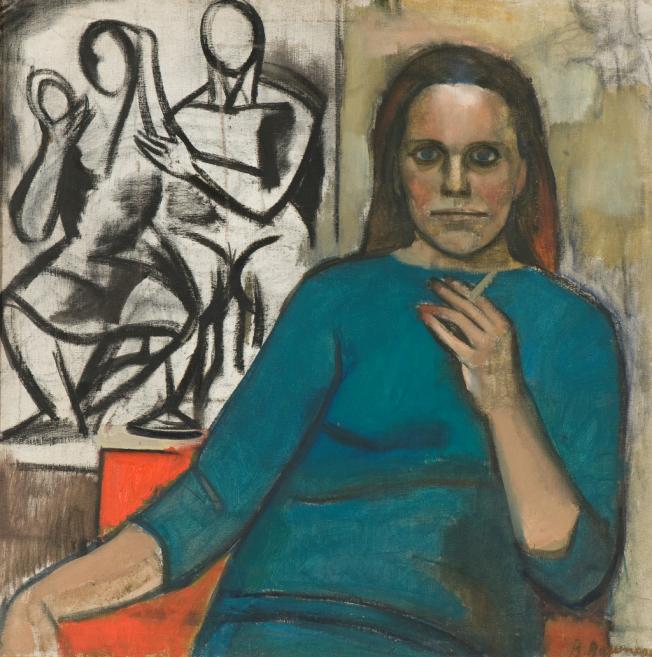 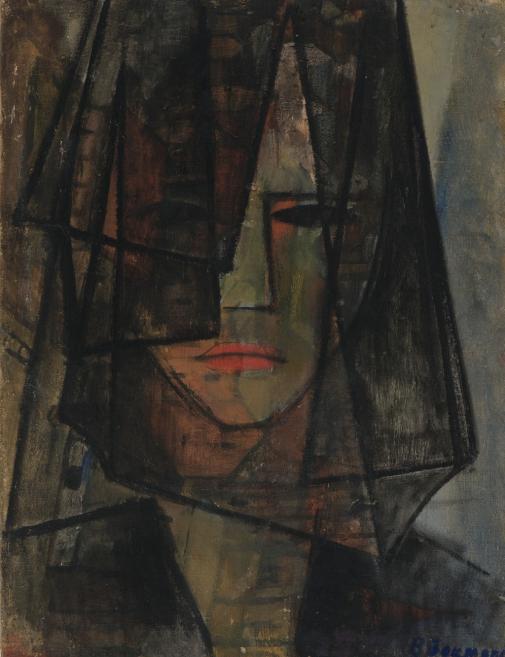 Biruta Baumane. Self-portrait in Black.
1969. Oil on canvas.Bequest of Biruta Baumane to the LNMA. Publicity photo 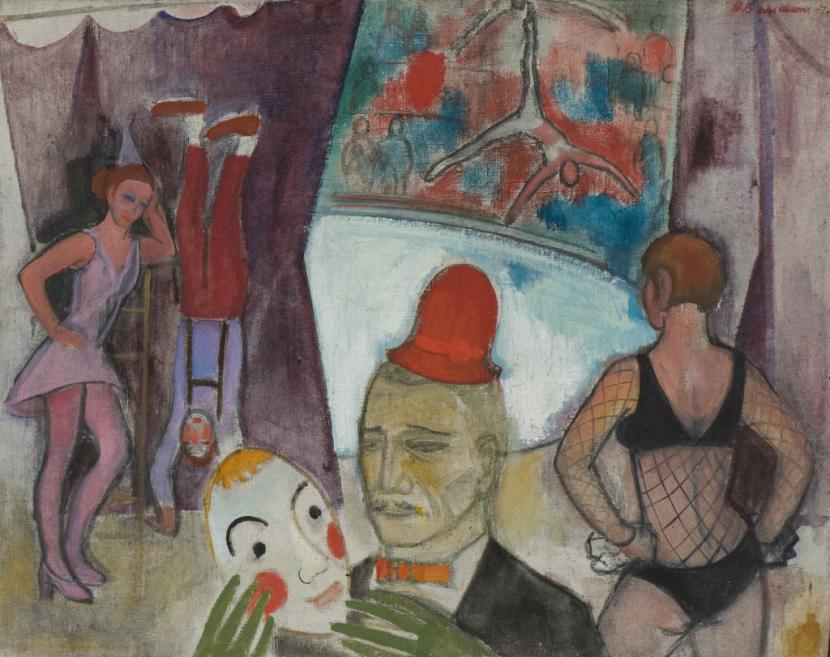 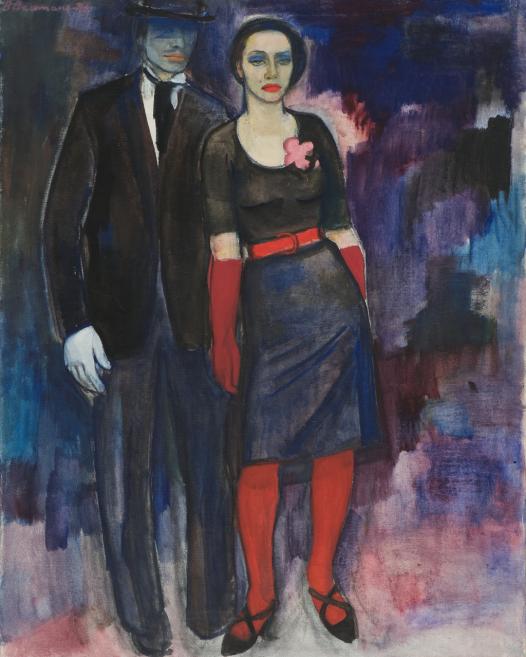 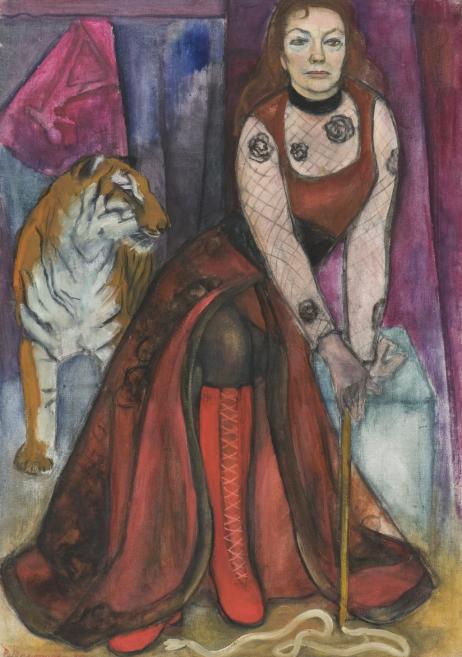 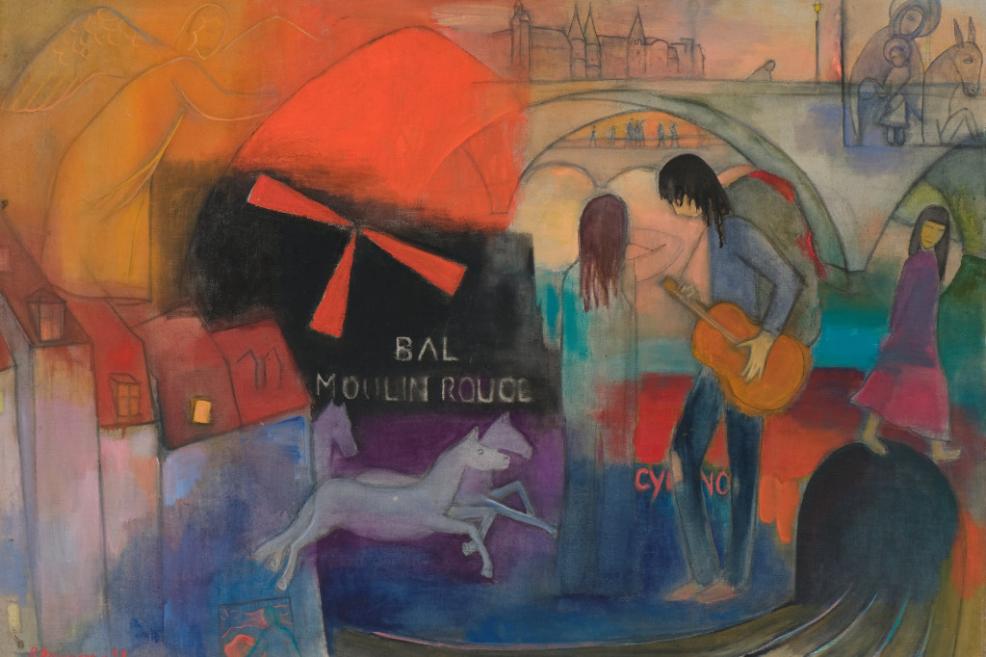 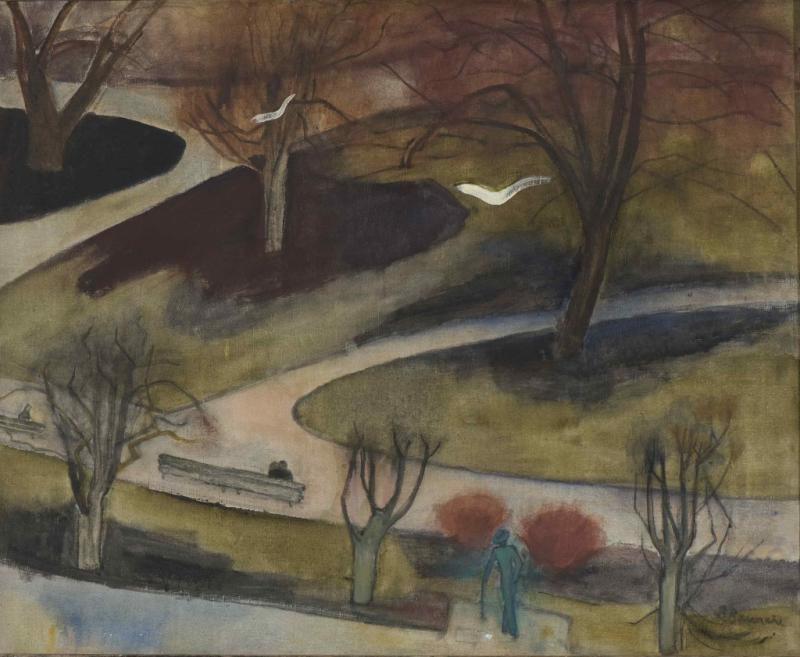 From 1941 to 1948, Baumane was a student at the Department of Painting of the Art Academy of Latvia. In 1942, alongside studies at the academy, she joined the Department of Philosophy of the University of Latvia, but the department is shut. Almost without any command of French Baumane transfers to the Department of Romance philology, failing only in the final year’s exams. This is where Biruta gets to know Maija Silmale – it is an extraordinary world of unfamiliar thoughts and sensations. Maija has a French air. It is marvellous – to not sleep at night and listen to Maija reading Gide, Valéry, Baudelaire, Verlaine, Rimbaud, Camus instantly translating them into Latvian… Maija also owns tapes with French chansons, and, of course, Edith Piaf, she sings out her life, her love. That is what Biruta perceives most clearly. Days are fulfilled, Biruta enjoys spending the summer in Riga, preparing for exams, returning at night through the empty city streets. All that is new is eagerly absorbed, it is easy and comfortable together with friends. There is the ballet, performances, books, exhibitions – nothing is to be missed! The opportunity to learn from the originators of classical modernism – Valdemārs Tone, Jānis Liepiņš and Ģederts Eliass – at the Art Academy, with the addition of her own temperament, has changed everything – painting has taken the upper hand.

The time until the 1956 Exhibition of Young Artists is difficult and dark for both Biruta and Latvian art – the controlling prescriptions of socialist realism suffocate every form of free and creative expression. Eight years pass almost without painting, also owing to new events and tasks in life – her marriage to sculptor Kārlis Baumanis, the birth of daughter Laine and an already faltering family life. The 1st Exhibition of Young Artists changes everything irreversibly – Biruta Baumane is noticed, just like the entire group of friends, life again has become busy and active. 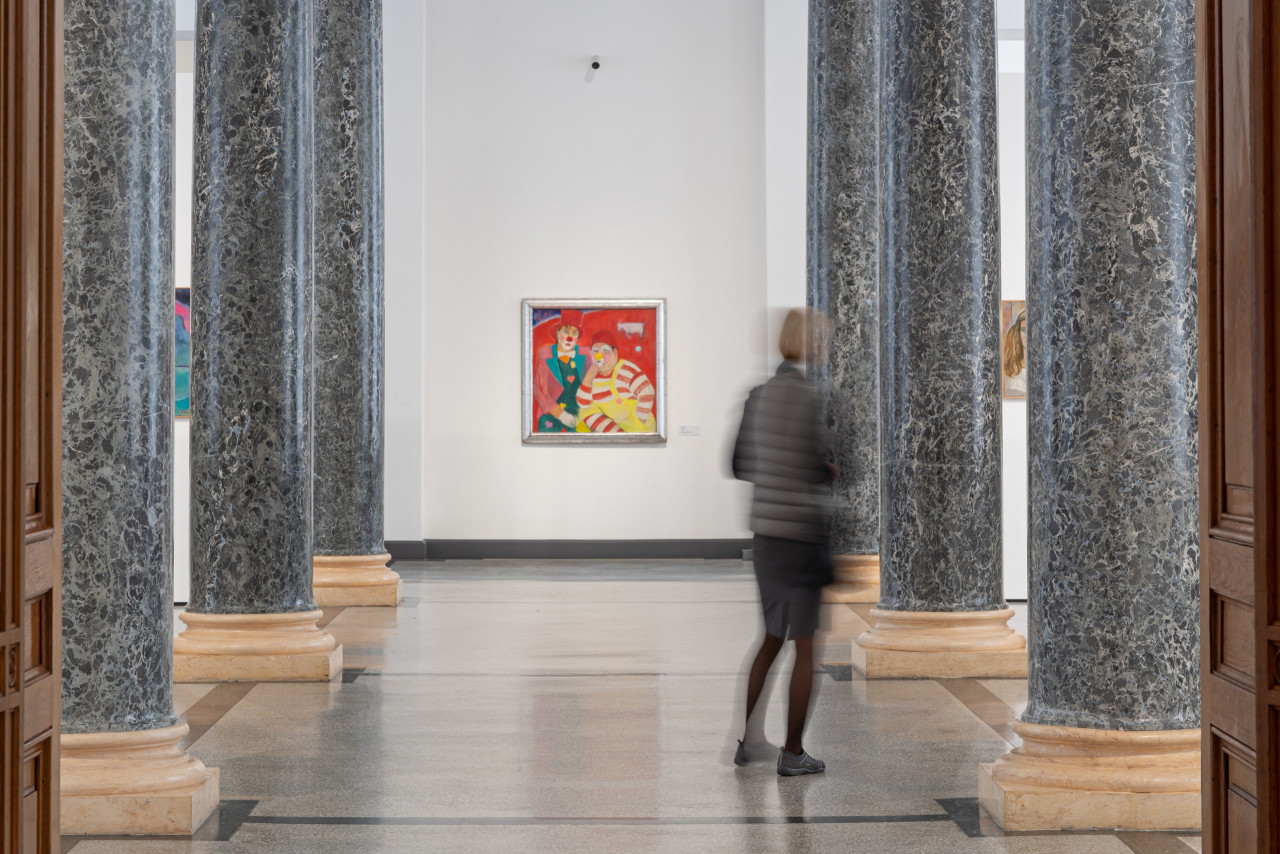 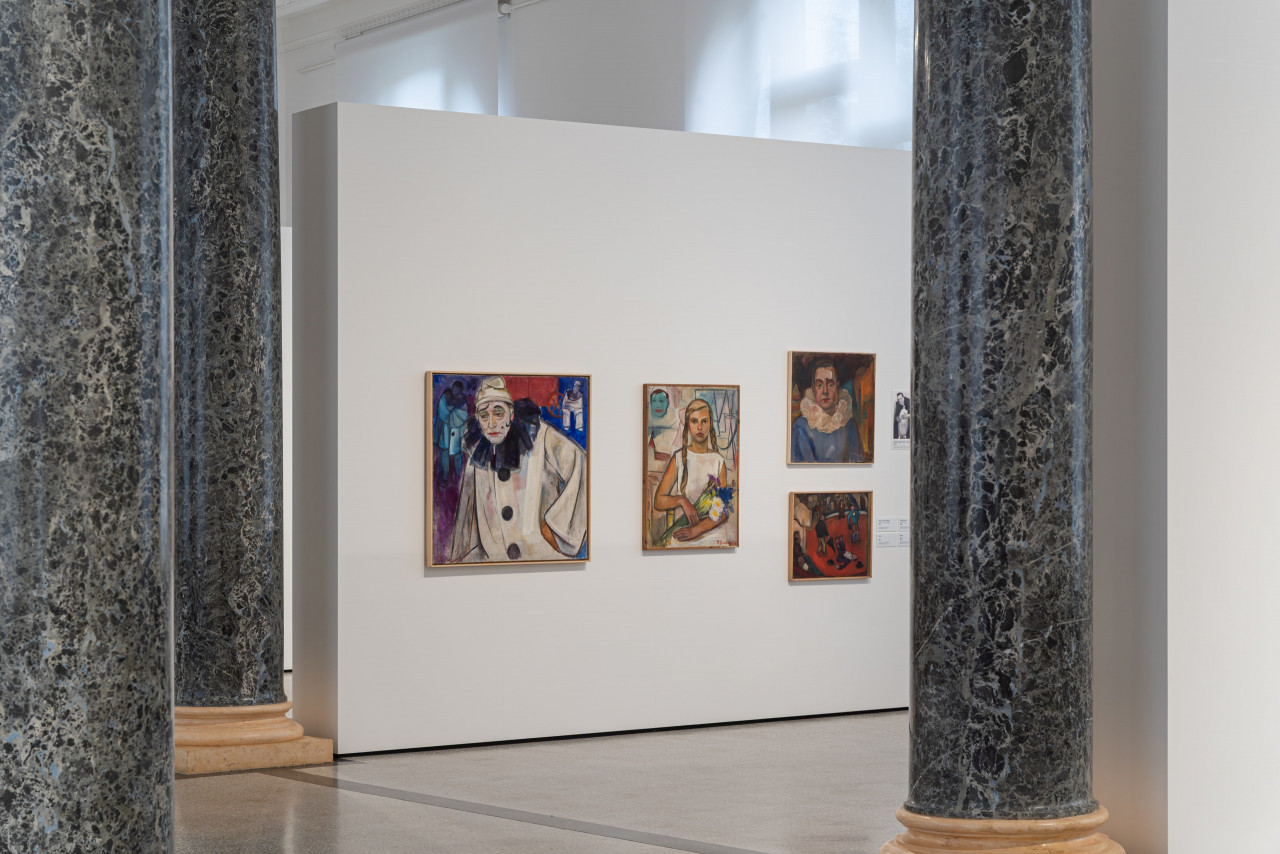 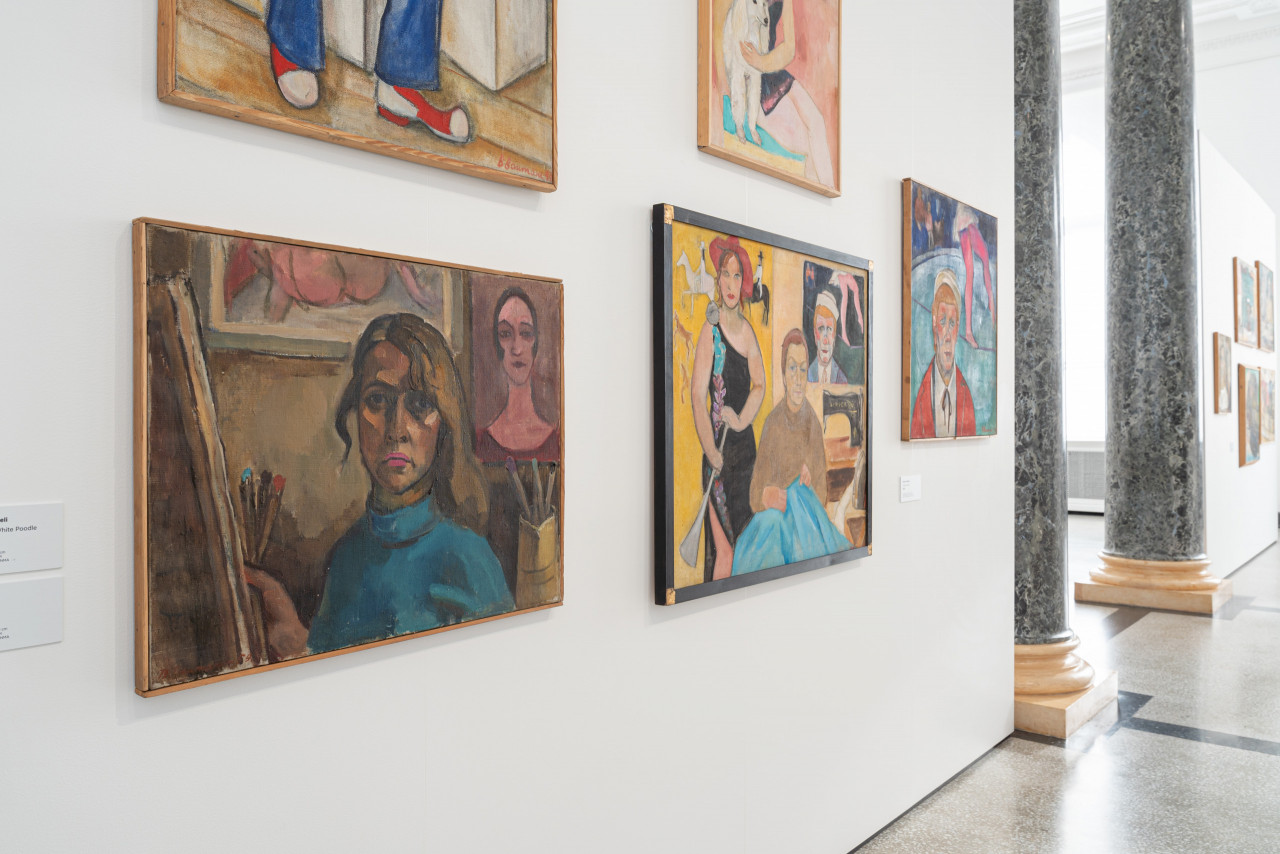 Biruta Baumane paints and there is nothing that could stop this process. In 1966, at the Artists’ House the painter holds her first personal exhibition. It is an occasion, Biruta glows in the lights of art’s stage surrounded by friends, the music is playing, and a recording of Puccini’s opera La Bohème, presented by an unknown viewer, thereafter becomes the music of Biruta’s own uncontrollable passion and thirst for life.

There is a lot of joy and creative success, but her own house is empty. The warmly lit window to a life where there is love and trust is not from Biruta’s house. Yes, the doorbell rings and a carnivalesque whirl carries her into unexpected adventures, Biruta, with butterflies in her stomach, is happy and full of ideas, but once the celebration is over, there is a new day where she does not belong. Baumane has a house, a studio and an insatiable desire to paint life. Biruta paints in places of high intensity – such as harbours, fairs, the circus – joy, reunion and separation, glory and risk. It represents a renewed belief in a moment of dazzling beauty, which also brings out the transient note of happiness. From time to time, in the harshly illuminated circle of the circus arena there is the melancholy story of a small life where the protagonist’s shortcoming is that he is alone, while the dream is large, and that makes those who are happy dissolve into laughter.

Biruta Baumane paints what she experiences, especially in nudes. These can be light and relaxing as the drifting of ice, airy and thinly painted with a red outline, or weighed down, freezing. The eyes and the mouth are what hits the artist, that is where everything happens and the living being is to be found.

The exhibition shows works from the collection of the LNMA and paintings bequeathed to the museum by the artist Biruta Baumane.

Ilze Putniņa, Curator of the Latvian Painting Collection
(2nd Half of the 20th – 21st Century) / Latvian National Museum of Art