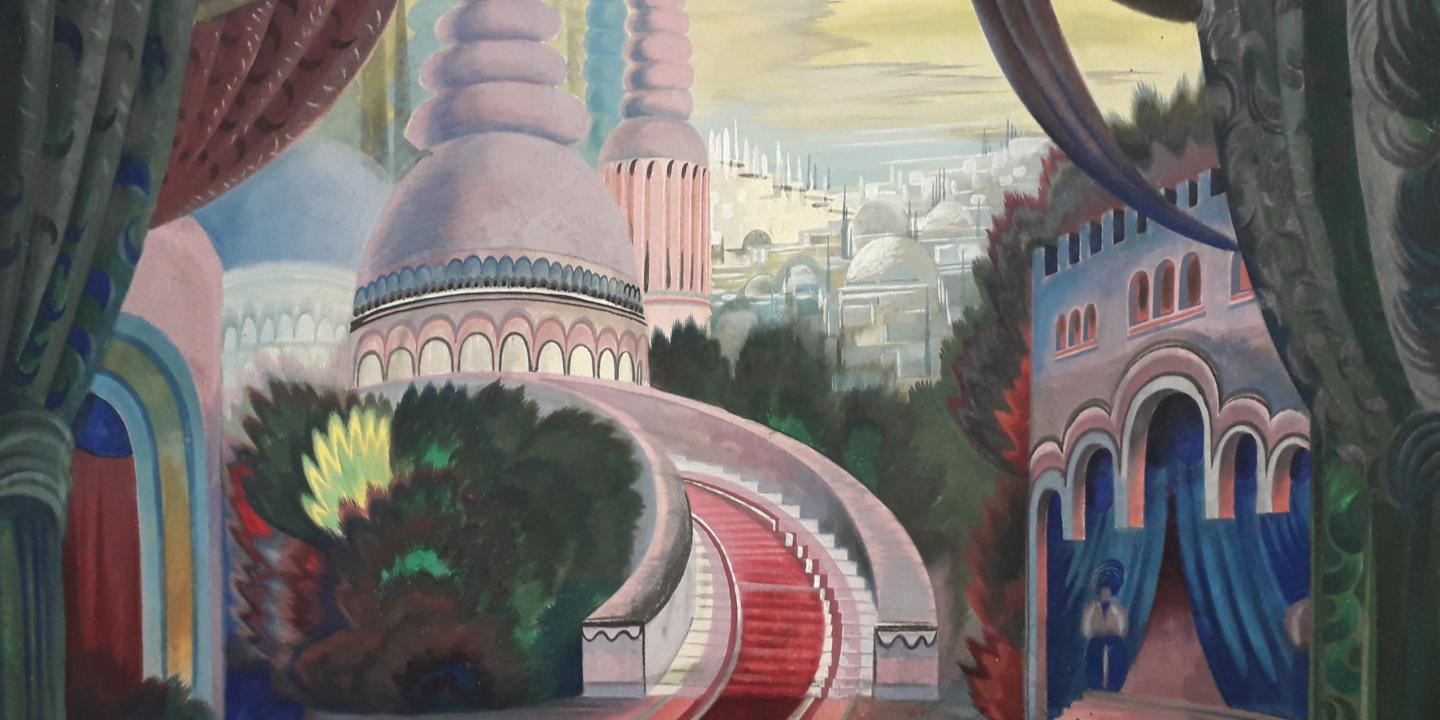 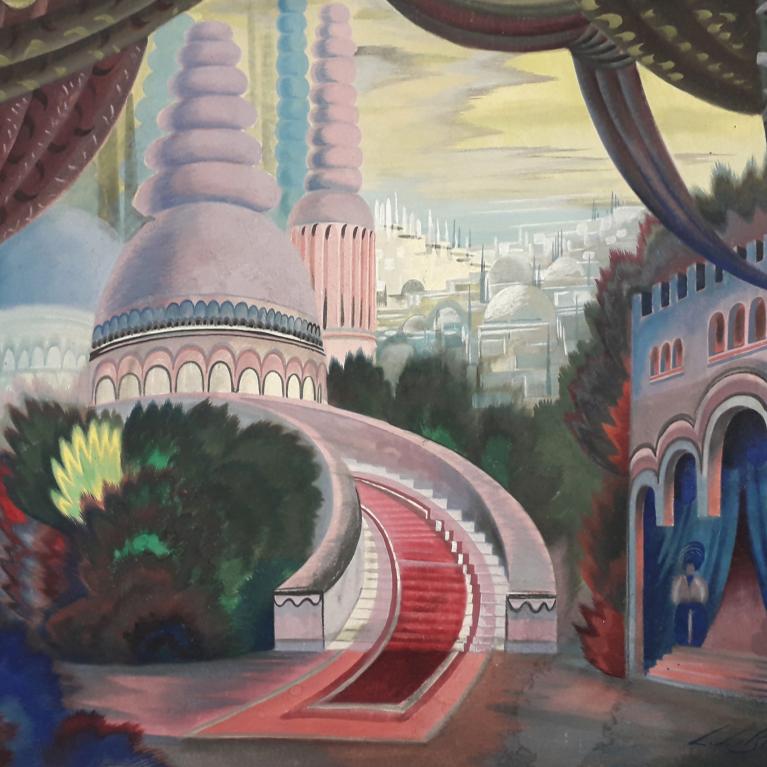 From 1 March to 30 December 2022, the Romans Suta and Aleksandra Beļcova Museum in Riga (Elizabetes iela 57a, Apt. 26) presents the exhibition Ludolfs Liberts – The King of Art Deco Theatre.

Ludolfs Liberts (1895–1959) was one of the most striking artists in theatre in the 1920s–30s. The performances he designed stand out with their vivid imagination, bright colours and richness of form.

Liberts possessed a special ability to gauge the desires of the public, he knew how to conjure up a magical world on the stage, surprising and exciting both critics and viewers. When the curtain was raised, Liberts’ stage designs were often received with an ovation, and, looking at the sketches and photographs of the stage designs of these performances today, this excitement is understandable.

The Art Deco era, which coincided with the peak of Liberts’ career in theatre, found its expression in the ornamental motifs of the costumes and sets that he designed – palmette variations, geometric ornaments and zigzags, an emphasis on vertical rhythms, a fountain-like flow of forms. Taken together with the intensity of contrasting, bright colour and gold, this created an outstanding impression. Ludolfs Liberts’ biographer Jānis Siliņš wrote that the artist achieved this colourful brilliance on a monumental scale by using “pure”, unmixed colours: “Kilograms of bright Turkish red, blue, green, yellow disappeared into the buckets”. An Art Deco luxury and chic marked both productions with exotic settings in the orient or the Far East (operas Aida (1927), Turandot (1930), Samson and Delilah (1931) and The Queen of Sheba (1935) among others) and performances with Latvian folk themes (operas Vaidelote and Sprīdītis(both 1927) and others).

The performances that Ludolfs Liberts designed were shown with considerable success in Lithuania and Sweden, while from 1929 he also worked as a director. The artist held personal exhibitions in Paris (1927), Brussels (1929) and Berlin (1930) – everywhere including his stage and costume designs among the exhibited works.

The exhibition at the Romans Suta and Aleksandra Beļcova Museum presents a selection of Ludolfs Liberts’ works from the collection of the Latvian National Museum of Art, complemented by separate works and photographic records from the Literature and Music Museum as well as original costumes and costume accessories made according to Liberts’ designs from the Museum of the History of Riga and Navigation.

A significant portion of the works have been restored especially for this exhibition and have not been accessible to the broader public for many decades. 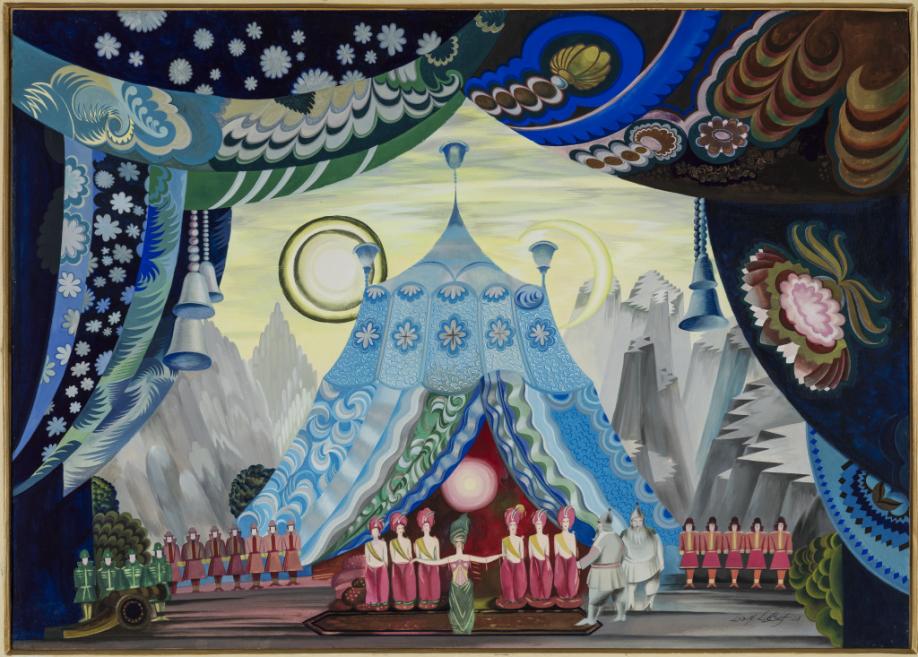 Ludolfs Liberts. Sketch for a stage design. 1928. Gouache on cardboard. Collection of the Latvian National Museum of Art. Publicity image 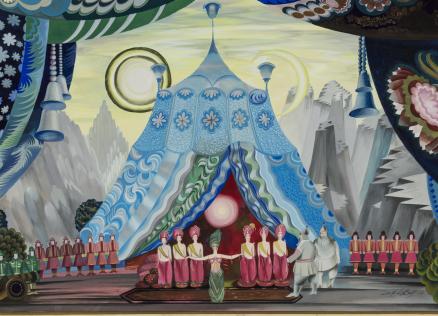 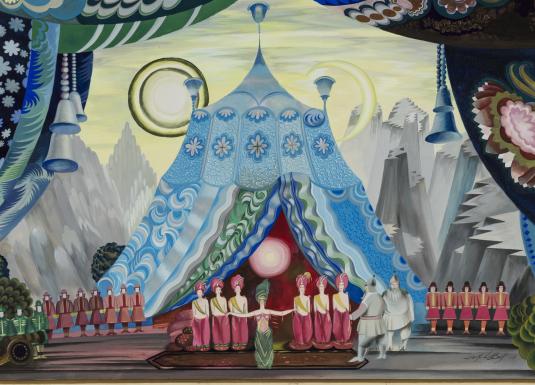